5 Must See Film Locations in the Black Hills

The Black Hills captivates millions of visitors each summer, but what you may not know is the unique landscape and historic significance that has also drawn numerous filmmakers.

This list of films that have had productions in the Black Hills is staggering; from Sci-Fi’s that have taken advantage of the unworldly terrain of the Badlands to films featuring Native American experiences and narratives like Neither Wolf Nor Dog and Hidalgo.

Here are five famous film locations that are a must-see if you’re visiting the Black Hills, or just interested in the history of cinema here.

No list of iconic Black Hills movie locations would be complete without mention of Mount Rushmore and Sylvan Lake, located just two miles behind the infamous shrine to democracy.

There have been a number of movies filmed at the State’s well-known national landmark including: National Treasure, North by Northwest, Head of State, and Never Ending Story III.

National Treasure: Book of Secrets is a 2004 film starring Nicholas Cage, where scenes were filmed at both Mount Rushmore National Memorial and Sylvan Lake. The Mount Rushmore scene features a hidden chamber behind the head of former Pres. Abraham Lincoln. As it turns out the filmmakers didn’t just “make it up” when it came to the secret chamber, there is in fact a room carved into the monument. The room was meant to serve as the U.S. Hall of Records; a 70-foot tunnel was built during the construction of Mount Rushmore, which was left unfinished for decades. Congress shut down the idea after the landmark construction was complete. However, it was eventually completed in the early 1990s. As it turns out, unless you are Nicholas Cage; the room is not accessible to the general visiting public.

Chances are if you see epic granite formations, crystal clear lakes, sweeping prairie or out of this world dessert formations, you are watching a movie that originated in the Black Hills. 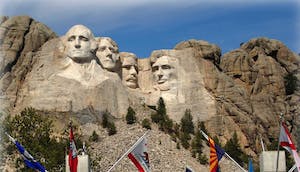 In a valley located off the scenic highway west of the Custer State Park Visitor Center, you will find the film location of three movies: The Last Hunt, Now the West Was Won, and Return of a Man Called Horse.

The Last Hunt is a 1956 MGM western film about a character with a long history of hunting buffalo. However, when the herds have been so dramatically thinned out, he soon regrets killing them. He goes on one last hunt with a partner, and it turns out the be the worst of them all.

The Badlands National Park is as dramatic and unique as it sounds, with layered rock formations, deep canyons and towering spires. (Which is a perfect background for the Sci-Fi movie genre.) Entire movies and scenes have been filmed with this other-worldly natural background such as Armageddon, Starship Troopers and Dust of War.

One of the most recent movies to make headlines however, is far from science fiction. The Rider is based on the true story of former bronc rider and rodeo star Brady Jandreau on his road to recovery after suffering a serious head injury in an accident. The film has become critically-acclaimed, with a particular focus on its cinematic beauty — provided by the backdrop of the Badlands.

Several major films have scenes that were shot in the Black Hills Wild Horse Sanctuary, including Crazy Horse, Hildago and Into the Wild.

Into the Wild is a 2007 film based on the book by the author Jon Kraksauer, published in 1996. Christopher McCandless, aka Alexander Supertramp, is a 24-year-old from a wealthy family who gives up everything – including his savings which he gave to charity, to travel across the country and into the Alaskan wilderness to live off the land. While hitchhiking though South Dakota, a scene filmed in Hot Springs shows Alex joyfully running with a herd of wild horses at the Black Hills Wild Horse Sanctuary. The Black Hills Wild Horse Sanctuary is home to hundreds of unwanted wild mustangs who don’t qualify for adoption programs due to their free spirits.

The film set of Dances with Wolves, located at Ft. Hays, is an important place to begin, not only because it’s one of the most famous movies to be shot in the Black Hills, but also to experience what life in the ‘old west, with cowboy supper shows and daily workshops (in-season) focused on activities such as rope and tool making.

Originally the film set was created on the owner of Ft. Hays, Clint Jones’s great-great grandfathers homestead. Jones explained after filming was complete the set was left on the land that his cousins managed.

“About one-year after filming wrapped up, we tried to set up bus tours to visit the film set on the homestead. Unfortunately, that didn’t work out because it was in the middle of a ranch and was just too hard to locate,” said Jones.

With the film set taking up valuable land on the family homestead, they considered getting rid of it. “That’s when my Dad decided to purchase the set and moved it to a more accessible location off Highway 16,” said Jones.

Visitors are now able to stand on some of the original building sets that were used during filming of the 1990 movie, including where John J. Dunbar received his posting orders.

South Dakota film history is ingrained into the spirit of Ft. Hays and they take the business of promoting the history of the area to heart. “There have been so many films that have been set right here in the Black Hills,” said Jones, “the list is more than 40-movies long.” He went on to explain that there are well known films such as Dances with Wolves and North by Northwest as well as some surprising blockbusters that visitors may not have known about such as Armageddon, which filmed scenes in the Black Hills.

“I feel it is important to showcase the film history of the Black Hills for us to show others that there is way more to this area of the country than they may have initially realized,” said Jones. 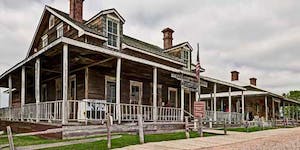 Below is a list of films with sets located across the State: